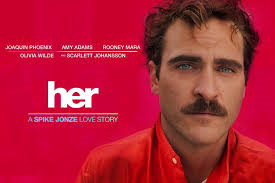 Her shows us an impersonal world, a colder world where even the warmest hearted individual is often surrounded by an isolating and sterile atmosphere. Work is done in isolation from others. Even sex is seen as an isolating event.
Conversations are all one-sided, as we see people walk by on the streets-each in their own separate bubble of solitude. This theme of separation and isolation really dominate the film. It’s been suggested that this movie is about the nature of love, but it’s really the isolating nature of the future we are witnessing. It’s the future we’ve set up for ourselves. The couples in the movie surround themselves with separate visions of technological progress and they work hard to establish their own individual identities. Therefore, it’s even harder to penetrate the layers of technology that engulf each of us. This seems to be the underlying message. Even as we’re together in body, we are alone and separated from one another by our own free will.
This shows us a sobering yet realistic tale of the future that rings true. It’s a future we may find hard to accept, yet in the end we don’t want to look away.
The performances by Joaquin Phoenix and Scarlett Johansson –she’s the voice of the operating system –are compelling and pitch-perfect. The solitary nature of the main character is given a sympathetic and honest face with the performance by Phoenix. He leads us into this world where each individual is placed in a kind of vacuum of existence. In the end, there’s not a lot of answers, but there are many interesting questions raised by this future world.
What is the future of our relationships when so much of our time leads us down a virtual rabbit hole that is void of all human contact? How could we recognize a real or simulated emotion if we have no experience with genuine human emotions? What makes a relationship real and lasting? And what is the true nature of love in this future world? These are the great questions raised as part of the landscape we are drawn into in Her.

The films that have won the Academy Award for Best Picture over the past decade have been, for the most part, forgettable. With the exception of No Country for Old Men and Slumdog Millionaire, the winners have not been the pictures that will pave the way for a new creative vision for the 21st Century. The winner for this year is no exception.

12 Years a Slave is an important footnote in history. But Gravity and Her were the two films impacting our lives with a vision of the future of film. In Gravity and in Her, the theme of isolation is pursued. For the milennials who are coming of age in this decade, that issue will be front and center.

Although it can be argued that slavery still exists in the world, the idea that we will continue to see this film as one that may impact our lives far into the future is remote. In Her, the idea that someone may fall in love with a voice encapsulated within a computer operating system is one that presents questions and challenges us to contemplate the nature of our relationships in the near future.

These are the films that will endure. The ones that stay with us and make us think are the films of the future. 12 Years a Slave does make us think of our past and who we were as a nation and a people. We have collectively moved on from a shameful period in our history. The U.S, along with many other nations, (Germany and Japan come to mind) will continue to deal with their inglorious past sins visited upon the human race.

Some of the films nominated for Best Picture were hard to watch. The Wolf of Wall Street also dealt with an issue currently in our culture, that of greed and amoral behavior. There will always be a place in Hollywood for tackling tough issues and shining a light on society’s moral failings. But when we look ahead into the next twenty or thirty years, we will see a different audience and a new way of looking at the world.

The trends are taking us far away from linear action, the traditional screenplay dialogue, and into a different focus, and new ways of advancing the story line. Hollywood and mainstream cinema seems to trend at least a decade behind the independent or experimental films. But in at least two films of the past year, Gravity and Her, we see the marked beginnings of a different type of film experience taking us along and pulling us into the 21st Century.

This is definitely an action/adventure film. Noah is in the category with some of the old Hercules films (They’re making a new one of these too!) This film is not an epic, nor is it a sweeping apocalyptic vision. It may well have had aspirations to be this type of film, but the reality falls short.
License was taken. License was taken to “flesh out” the story of Noah. And the irony is this: if Anthony Hopkins had played Noah, and Russell Crowe had played his eldest son, there could have been a damn good film made of this ancient story. But the reality of the Darren Aronofsky version is that it’s not a great film, nor is it a memorable one, but instead a tolerably decent story of Noah and the Ark.
The problem may lie in the method of trying to be all things. Noah fights in this film because we expect Russell Crowe to fight. Anthony Hopkins is the wise sage, because he is seen as the elder statesman. There is an obligatory young love interest, but it’s not so interesting after all. And the animals, which are at the heart of the tale of the Ark, are really used as an afterthought.
In fact, the computer generated models look downright fake at times. This is disappointing in an age where visuals are everything in a film. That being said, the film does have some interesting parts. They have written in a “stowaway” on the Ark, which is completely out in left field, if you are a strict constructionist regarding the Bible.
The rock creatures, fallen angels that help Noah to build this Hollywood version of the Ark, are particularly problematic in my judgment. In much the same way that Jar Jar Binks irritated the faithful fans of Star Wars, this addition to the story of Noah doesn’t really ring true. Yet the makers of the film must have felt the story needed that extra “oomph” that only rock creatures could provide. Go figure.
The plot thickens with just enough overtones of Mad Max to make the landscape look like something right out of Mad Max beyond Thunderdome. Everything is thrown into the plot pot and stirred. Where another directors vision might have included more plot development on a less grandiose scale, this director needed to pull out the action/adventure stand-by’s to keep this film moving along.
Would Noah and his family finish the ark before the evil army destroys their boat? Will Noah decide to let his family line die out after the flood? We know Noah and his family make the cut, so therefore we must have some type of added flavor to the story. One would think building a boat that houses all of the species of animals on the planet would be enough. Yet that is glossed over in about 5 minutes of air time.
Russell Crowe is a brilliant actor. He is not exactly miscast in this role, still he would be better served as a passionate Patriarch overseeing the New Beginning that conveys his Covenant with God. And yet, Noah’s role is not at all clear. He interprets the signs from the Creator, yet he’s never sure. And we are never sure of him.
This darker Noah is angst-ridden, filled with doubts and guilt. He doesn’t seem to have a focus for his energy. Is it his Love of God, his duty to family, his role as Preserver of the Earth, or the Keeper of the Animals? We are never sure.
In “The Bounty” there were some great scenes with Anthony Hopkins and Mel Gibson sparring with each other as they vied for the control of the ship. In this voyage, Russell Crowe as Noah flounders to understand his place. In silence, we see him struggle but never feel connected. And even the frames are at times disappointingly disjointed as they look more like storyboard stills then a cohesive and flowing picture.
Too many times the hand of the filmmaker intrudes and you may even think, “This looks like a storyboard.” That’s not what you want the audience to muse upon in the middle of a motion picture. When we know the characters will make it through alive, there has to be a compelling sub-plot. The rock creatures and the stowaway just don’t cut it.
In the end, it’s an interesting effort that would earn a B- or C ….2/1/2 stars perhaps…if we were judging this film on some arbitrary rating scale. It could be recommended only if you are curious about the logistics and execution of Noah’s Ark, and not a satisfying storyline.