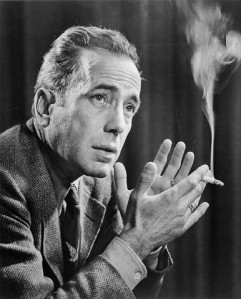 Bogart was an original. A truly complex individual, his background encompassed the sophisticated world of New York Society in which he was born and raised all the way through to his gritty life in the Navy and onto the uncertain life of a Hollywood actor. After leaving the Navy, Bogey started his acting career on the stage and was even credited with popularizing the effete term, “Tennis, anyone?’ early in his stage career.

He eventually went to Hollywood and landed roles as a gangster “heavy”. Although not traditionally good-looking, he finally managed to break free of his stereotyped villain’s image and became a leading man in romantic roles in his later years. His deep voice, tempered by years of heavy smoking, and his ultra-cool persona finally worked to establish him as a credible actor and then transform him into a major star.

But Bogart worked in the era of the Studio Bosses. His boss, Jack Warner, held an iron-grip on his employees, which included all the actors who worked at Warner Brothers.

Bogart frequently found himself in disputes with Warner and the Studios over his salary and his schedule. Big studios were notorious for lending actors out to other studios, even if the parts were fairly minor. Bogey balked more than once. And in order to back up his threats to walk, he would often speak of his F. You Money (In Bogart’s case, he would fill in the blank where the F is!) This money was his hedge, a special fund set aside that would enable him to make good on his promise to leave.

This was also part of the ongoing fight between management and labor over forming a union. The studios fought tooth and nail to prevent actors, writers, and other film workers from unionizing. In the end, unions prevailed. In the fifties, the studios caved in to government pressure when faced with the threat of a shutdown during the McCarthy hearings. They fired and black-listed many talented artists of the era after their names appeared on Joseph McCarthy’s list.

Bogart was one of the voices that was front and center in the group traveling to Washington to protest the House Un-American Committee. Bogey was a Maverick throughout his life. He fought in one form or another against the studio bosses and against many other forms of discrimination, oppression and injustice.

Would that we had more Bogey’s these days. Those men and women, like Bogey, with the courage of their convictions to stand up against the powers that be, whether in Washington or globally. It’s not a bad idea for anyone to set aside their own personal F. U. Money fund. It’s a nice thought that you may have a special fund to help you walk away when you know the time is right and you need to back up your rhetoric with action. In Bogart’s case, the F.U. Fund was real and so was he. As is often heard, they don’t make ‘em like that anymore!

What’s the point of making what some critic referred to as a “B-movie about World War II” in this day and age? The acting is the best part of this film. Shia Labeouf does a credible job as does Brad Pitt in the suitably intense role of “Wardaddy”, the leader of a band of men fighting in a tank during the last days of the European combat theatre in WWII.

The point: Resolve on the part of the U.S.  And belief in finishing the job. So when assigned to hold an important road, the leader of the team doesn’t question authority nor does he shirk his duty. All of the important words: duty, honor, courage, and heroism in the face of insurmountable odds-all of these factors are in play here.

One of the stand-out scenes in this mostly by rote war film depicts Pitt/Wardaddy going into a civilian German apartment and simply sitting down and behaving as someone would who is on holiday. He is simply taking a break from war.

Although not quite as effective as, say Spielberg’s use of the child in the red coat inserted into the stark black and white film, ‘Schindler’s List’, this gives us a stark and vivid reminder that not everything in war is black and white. Sometimes the nuances we see or infer become the most memorable take-a-ways from a film.

In some parts of the action sequences, I remembered how my father, a World War II veteran himself, would speak of the way the United States was always depicted in a war film. The John Wayne Mythological hero was just that -a myth. While the Allies were basically a brave and honorable group of men, no one was above reproach when it came to the treatment of Prisoners of War on the battlefield.

This film reminds us that the bravery we see is still very real in times of war, and the morality, or lack of it is sometimes lost in the “fog of war”. It makes even the most moral and upright souls begin to question their humanity and at times, even the existence of God. If that’s not part of the message of this film, then perhaps it’s one that should be considered.

And perhaps the revival of the WWII soldier/ensemble movie will continue. Or maybe this is the last gasp of a dead genre-but for those who love action/adventure films, or war movies in general, this film should satisfy.

I walked into the latest AMC movie to be presented with yet another price hike for everything from movie tickets to popcorn. This is no surprise, as prices have steadily been rising at the AMC Theatre movie chains for several years. As a movie critic, I will watch a lot of movies during the course of a year, and cost becomes a pretty big deal. The solution? At times, I’ve seen movies at the early show to beat the price jump, or I’ll go to a lesser chain-not as plush as AMC but the movies only cost 5 bucks.For many movies, that’s more than they’re worth! As far as the concession stand prices, most people know by now that this is the way theatres make their profits. So everything is incredibly marked up.

And at AMC, they have taken full advantage of the price-gouging in this new era. The good news (for AMC) is that there exists a new generation of movie-goers willing to pay the prices without question. But there’s another sub-set of the viewing public that largely stays away from the big screen movie. This is a shame, as so many great and classic films are meant to be viewed in a theater and on the Big Screen.

Yet more and more talented writers and directors are taking their talents and heading to cable outlets. As the audience moves to the smaller screen, so does the talent. There’s no immediate solution to this growing problem, but my prediction is that if the trend continues, we may be waxing nostalgic on the bygone era of the Big Screen Movie, sooner, rather than later. 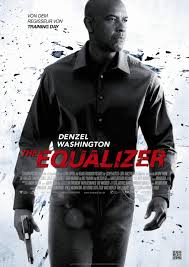 Denzel Washington has chosen a character driven narrative in this story. The character of Robert McCall is from a TV series, but in this film, he’s seen living in his own meticulously crafted world. And though the action is edge of your seat, nerve-rackingly violent in parts, it’s tempered with the knowledge that Robert McCall (Washington) is trying not to be seen as a crazed killer. McCall is a caring friend, a dedicated and hard-working employee, a good listener, and a man of honor and integrity. …Who just happens to be good at killing people. That’s the take-a-way.

As for the acting, I thought Denzel Washington was excellent in this role. It seemed to suit him very well. (Stop reading if you are worried about spoilers!)And there were hints that perhaps they may continue the character of The Equalizer in a series of remakes. Shocking as that seems, it looks to be a suitable candidate as it contains a storyline that begs for a sequel.

The funniest part of this movie, (which has no comic relief, by the way), is the fact that the villains are Russian. In fact, the last two films I’ve seen featured ruthless Russian killers. Apparently, Russians are the new Nazis. They are the latest thing in good/bad villains. This film may be too violent for some, but the action is intense and the storyline is gripping enough to warrant a viewing. For those who love action/adventure films, and Denzel Washington movies in general, this would be a must-see.