The following is an excerpt from my book: 6 Degrees of Film: The Future of Film in the Global Village-published in 2013-MLJ
One of my biggest beefs is that even in the twenty-first century
the Academy Awards show looks a lot like a holdout from a
bygone era. The glitz and glamour are not as believable when
there is so much more to the film industry in the modern era.
The age of computer imaging and video games and the type
of sophisticated special effects used in modern films are barely
acknowledged. Little mention is given to the separate awards
ceremony held for the scientific and technical awards.
James Cameron invented a new method of filmmaking, and
George Lucas and others initiated many breakthroughs in the
way we see things on film. But none of these accomplishments
are honored. New categories should be created to acknowledge
these developments so they can be brought to the public’s
attention.

The global village of filmmaking is compartmentalized
into one or two categories of short films and the foreign film
category. Even though Slumdog Millionaire won several Oscars
in 2009, the film is treated as if none of that ever happened.
The encapsulated world of Hollywood elites still appears to be
fairly homogenized (barring a few obligatory jokes about Jews
in Hollywood). The only nod to the changing of the guard
was in 2010 when Barbra Streisand handed the Best Director
award to a woman (Kathryn Bigelow for Hurt Locker) for the
first time, and when Halle Berry, the first African American
woman to receive the Best Actress award, acknowledged
Hattie McDaniels and all of the women of color who had
come before her.
If Hollywood and filmmaking are a large part of the
American persona, and this show is one of our best chances
to advertise our unique and diverse American way of life,
then why doesn’t Hollywood pull out all the stops on these
occasions? Instead, the powers-that-be in Hollywood present a
timid and tepid tribute to films in a way they have done many
times before. Shouldn’t there be some acknowledgement of
innovation? To my mind, that is “the stuff that dreams are
made of,” which Bogart spoke of so long ago.

Greetings Film Fans: The broadcast is coming soon for the Oscars, and the controversy over the decision to not include the cinematography categories during the live show has been resolved. This is the SECOND major controversy that has been addressed in the post Me-Too and whitewash era that the Academy (of old white dudes) has had to address.
This crisis is specifically one that will just address the 1% attitude that some of the awards are more important than others, and admittedly, many are more popular than these awards if you are not in the ‘biz’,as they say. But for the arbitrary decision to be made, for a numbers game of ratings to reduce the show’s time by simply eliminating some of the work that these people have been doing for decades and dismissing the categories as not important enough seems to be callous beyond belief. So many people objected, including an impassioned Russell Crowe, as well as prominent directors and others, that this had to be reversed. 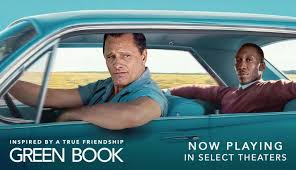 So the favorites are still The Green Book and Glenn Close for Best Actress in The Wife. Other than that, it seems to be pretty wide and open. It would be amazing to see Spike Lee receive the first Best Director award for BlackkKlansman. And Christian Bale did phenomenal work in Vice that may also be a shoo-in. However, although I’ve complained for years about the awards ceremony, the length, the need for new categories, I will still watch it to see what happens.
You never know if they’ll call out the WRONG picture for Best Picture category?! Stay tuned for Oscar News, as we wrap up awards season in La La Land. Some stand out articles in 6 Degrees magazine this week: A piece on the films of the French New Wave cinema and one on the late great film critic Pauline Kael.
Till next time friends, stay cool (in the movie theatre) and see you next time at the movies!-ML

*Love and Longing through the Lens of the New Wave

*What she said: The Art of Pauline Kael