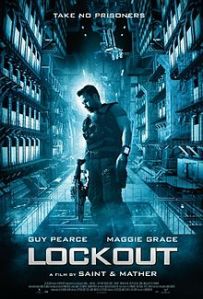 “Lockout” is a strange brew that is formulated much as “Cowboys and Aliens” seems to have been mixed last summer. The concoction includes one wisecracking “Die Hard” hard-nosed and cynical cop who has seen it all. There’s a beautiful blonde that needs rescuing, there’s a space station that is stranded, and oh, yes, there’s some terribly politically incorrect Irish gangster types who are the bad-ass criminals intent on murder and mayhem. There are a few mob scenes during the course of the film that show the whole criminal prison gang but they have almost as much character development as the mob from “Frankenstein” sans torches. Hollywood is stuck on formulaic models. They say: “Let’s do what’s worked in the past over to the nth degree and add on everything including the kitchen sink ‘just to make sure’ it’s a hit”. So in this one, just for insurance, there’s a scene right out of “Star Wars” where the pilot flies into the heart of the space station to destroy it… The film is fairly entertaining at times, and doesn’t move at a slow pace. But most of the critics seem to be insulted by the lack of effort made to even try and make it look like something other than what it is. What it is is a “hodge-podge” of ideas that have worked in the past that are baked together to brew a script that will make money. That is the oldest trick in the book, and sometimes in Hollywood, it does work!