So…is the movie Good or Bad? That is the question coming from one spot-on commentator in our 6 Degrees magazine from this past week asking about the reviews for the film “Ghost in the Shell” with Scarlett Johansson. There are plenty of mixed reviews for this one, and the consensus was that they used the term “whitewash” to the extent that the film was buried somewhere in the lead….

But the bottom line is that all that may be overcome if the film has good “buzz”. And this film did not. There are plenty of reviews out there that are mixed for most of the films. It’s always a question of the audience preferences, and there have been several films in recent years that have bombed in the U.S. and done quite well overseas

Some examples are: John Carter; The Golden Compass; After Earth; Poseidon; Water World; The Wolverine and Pacific Rim. Some films don’t hold up well, some are big hits but fade fast from memory. The dirty little secret we all must concede is that film reviews are highly subjective, and with the amount of film blogs and posts out there, you can usually find even the worst reviewed film with at least one critic who actually likes it!

The other comment comes from Sir Smoke regarding the posit from an article stating that New Horror films are better than ever….Sir Smoke simply said, “No. New Horror Sucks”. I couldn’t agree more. As someone who was raised on Hitchcock…and with the idea that the best elements of horror are found in the simplest of details, some of the latest horror films don’t seem to rely on the simple ingredients that made Hitchcock the master of suspense. These details, the things that make for the best components that create horror in the mind and on the screen are somehow lacking in most of the new age horror films.

Simple elements of suspense are found in all of Hitchcock and in films like The Portrait of Dorian Gray, The Tingler, Carnival of Souls or George C.Scott’s 1980 film, The Changeling. In this latter one, the simple act of rolling a small red ball down a flight of stairs is listed in ‘The Horror Digest” blog as one of the scariest moments on film. Such a simple act and yet…the horror!

On Critical Thinking: There’s a piece called, “Just review the Damn movie” this month that speaks to a lot of the political correctness surrounding recent films with issues such as diversity and whitewashing. Some of the films that are striving to portray women and people of color or those in the LGBT community with dignity and accuracy are at odds with most of the history of film. And for that matter, the history of the United States and the rest of the planet as well!

There are some big problems facing Hollywood these days. These are addressed in a piece from 6 Degrees Magazine written by Bill Mechanic, the CEO of Pandemonium Films and featured on Deadline.com. The problems surrounding what has become the Hollywood machine includes top executives leaving the major studios like Paramount and Sony. The “Tent-Pole Films” (Defined as films that are big expensive draws for global audiences and are designed to spawn multiple sequels) are not producing the results in many cases that were expected. Big, expensive movies that flop after huge amounts, hundreds of millions of dollars are poured into the making of them, mean that somebody’s head will roll when the bottom line looks bleak.

The phrase for some of these less than promising films is the “get-around-to it” movies-meaning you’ll get around to seeing them on Netflix or the small screen. We’ve all seen plenty of films in that category…

The changing nature of the business is part of the entire work force that has to adapt to change. Disney has proven to be a major Disruptor by taking much of the market share. They have bet on big brands, Pixar and Star Wars plus Marvel Studios, and it has become harder for other studios to compete. It’s become in essence the Wal-Mart effect for the Movie Industry.

Is the movie business in denial, as one writer from The Verge posted recently? Some six of the seven major Hollywood studios are negotiating to release their films on home video barely three weeks after the theatrical release date. Virtual Reality is another focus for the business, with major theaters touting the VR experience as a way to counter slumping ticket sales. This is part of the aforementioned long-term trending. The idea that most brick and mortar buildings now housing movie theaters may become akin to the arcades of old, with other entertainment options featured along with films, is now taking hold. This may be the wave of the future…

The Armchair Film Fest: For the month of April, there are some great films to set your designated machine to record: Recommended are The Miracle Worker, Hannah and her sisters, Ivanhoe, Harvey, The Set Up, A Hard Day’s Night, Funny Girl, Please Don’t eat the Daisies and Butch Cassidy and the Sundance Kid. Watch the 6 Degrees magazine for reviews on these films if you’ve never seen them…

All of these films are on Turner Classic, which is great because there’s no commercial interruptions. One other noticeable difference on the Turner Classic site is that they’ve finally said goodbye to Movie Morlocks and have an upgraded blog site: Streamline, which has a much cleaner look and some interesting reviews- the short films of Harold Lloyd and Wuthering Heights vs Jane Eyre-all featured on our 6 Degrees Magazine site this week.

Two master film makers are mentioned in a post about the most difficult scenes to film Director Stanley Kubrick did one small scene in “The Shining” over 148 takes. But Chaplin was most notorious for his perfectionist style-one scene in “City Lights”, just a short time on the screen, took him an astonishing 340 times for the girl to say the line, “Flower, sir?” to Chaplin. Food for thought the next time the boss demands your attention to detail!

There’s a post listing the best films of Al Pacino, and one piece on the many plot holes found in Marvel pictures. Those who read me regularly can see me smiling, as we all know that the main reason for Marvel pictures isn’t to tie up loose endings and create logical plot points! 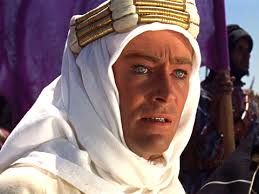 There’s also a post that lists the best films about World War I, in honor of America’s 100th Anniversary of our entrance into WWI. The one thing I do take issue with is the inclusion of one of my favorite films: Lawrence of Arabia. Although it’s true that the film does depict war scenes and occurs during WWI, this film isn’t really part of the European war that was fought on the continent. So technically, it may be included, but it’s not one that immediately springs to mind when I think about the Great War. Galipoli, Sergeant York, and Paths of Glory yes-but not Lawrence!

I’m thinking about the Summer Movies a bit early this year. Some look very promising, and we’ll talk more about them in the coming weeks. Also recommended is a good book on film- Talking Pictures-by the Washington Post film critic Ann Hornaday.

I’ll be back next time with more of the latest from the La La Land of filmdom. Till then, see you at the movies!-ML