The Artist is playing this weekend at Tampa Theatre. This review was originally published on 6 Degrees of Film in 2012. Here’s the updated version: 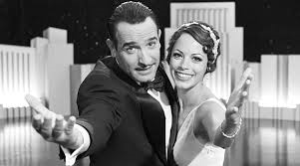 One of the best sequences in “The Artist”, the Academy-Award winning black & white silent film, is the one where sound is used. That’s not to say that films without sound are not worth seeing. Some of the most moving sequences ever filmed have been moments that have no sound. Liam Neeson had the role in “Suspect” where he plays a mute, and it was apparent early on that he was the only one in a cast that included Cher with real acting chops. In “There Will be Blood” one of the most creative sequences in this dark look into the psyche of a self-made 19th Century robber baron was the opening of the film where Daniel Day-Lewis doesn’t speak for a good ten minutes into the film. In The Artist the scene where the very successful and extremely egotistical star dismisses the viewing of the “talkies” as a fad finds him waking up in a cold sweat in the night after he dreams of hearing sound on film where none had been before. That is perhaps one of the more creative moments in the film. This film stands really as a series of vignettes, a kind of homage to the way that early films were made.

They were short one-reelers and like the one and two-reelers, you could find the plot of this film written out on a half page of notebook paper. Boy meets girl, they fall in love; conflict ensues; they overcome obstacles to be together; the Denouement-Finis-The End.

That really is a short history of the movies encapsulated in this film. The power of silent film has been lost on so many generations that have missed out on much that was conveyed through film in the silent era, Actor and Comic Bill Murray recently spoke of watching a DW Griffith silent film in France that was totally riveting. It seems the French have a higher appreciation of the silent medium in general. I don’t believe that just everyone would simply fall in love with this movie. That is conveyed in the box office numbers, which show this film to be probably the least viewed of any Academy Award winner in recent years. It is not an action flick or a comedy or a chick flick. It is a film about film in the sense that it conveys some messages about the appreciation of a medium-silent film- that is not in existence save for a few random viewings on select cable channels. This is the nature of show business and this film is unique in that there are less than six degrees of association to arrive at the beginning history of film. It serves as a perfect example for anyone interested in the history of film, and it’s definitely a must see for those playing the game of “Six Degrees of Film!”

One thought on “The Artist: Capsule Review for 6 Degrees of Film”