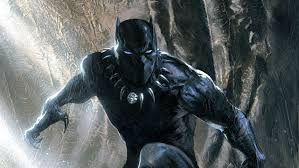 I’ve seen so many reviews of this film that center around the ‘feel good’ politics of Black Panther. I’ve seen the fantasy politics of Black Panther listed, as well as the spoiler alerts tying the film into the Marvel Universe. There’s the record breaking box office numbers, as well as the stories of the many groups of young African American children going to see this film. And others who see it are wearing traditional African garb. In short, it’s a phenomenon…a ‘thing’.

And the film has been well received. Of the films in the superhero universe, this one is a cut above the rest. The plot centers around the rise to the throne of T’Challa, who is the new king in the fictional African country of Wakanda. Wakanda has hidden its amazing and superior technology from the outside world, and this is the central debate later in the film. Should they share this knowledge, or continue to keep it hidden…?

Without too many spoilers, the film is driven by the rise to the throne of the new king, played by Chadwick Boseman.  The Black Panther’s super powers include not only superior intellect, but his strength which is derived from the special formula that is given to the king to drink. And then there’s the technology, similar to James Bond’s, where he dons a special suit made of the miraculous fictional metal mined only in Wakanda known as Vibranium.  The Vibranium  makes him impervious to bullets and other weapons of dastardly origins.

But in my estimation, the thing that sets this superhero apart is the fact he is touted as a man with a heart. His father talks to him from beyond the grave, telling him, “You are a good man, and that is something that may bring trouble for you”, which is a wise thing to tell your son, if you only have a few moments with him in the afterlife. The film centers not entirely on the concept of this superhero saving people and thwarting dastardly deeds, but also working to help others, to find himself and to find his true love.

In other words, it may depict the life of an ordinary man in an extraordinary world, or the reverse of this. That is the debate in history: Are great and exceptional men made so by the times they live in, or is greatness thrust upon them due to the circumstances in which they find themselves? We think of our Founding Fathers and the greatest Presidents and leaders of the Civil Rights era. These men all had great hearts, and although most had their share of flaws, they were able to rise above and to grasp the moment and meet the occasion to prevail.