Hello everyone!  This week at the movies, we are looking at some films opening that were highly anticipated, and are now expected to bomb badly. The Nutcracker and the Four Realms is one that looked beautiful, and according to most reviews (See Ebert.com in 6 Degrees Magazine), it is a muddled mess of a story.
Some other news of note include the release of Orson Welles last film that was held up for many years. There is Bohemian Rhapsody, which has also garnered some lukewarm reviews.
Here is 6 Degrees of Film list of films debuting in November, including the Nutcracker remake that has reportedly fallen short of expectations. Check them out here, and in our Fall Film News. 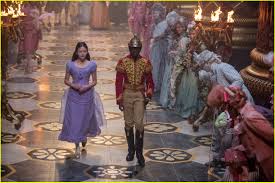 The Nutcracker and the Four Realms is another offering in a series of films that tell the classic story of Tchaikovsky’s Nutcracker, who based his famous ballet on an 1816 story by E.T.A Hoffman. The fantasy film is a big-budget number, with designs and sets that adhered to ‘a strict historical cutoff from the year 1879”.
Benedict Cumberbatch will put up his Sherlock Holmes cap to play another classic character, the Grinch, in the animated remake of Dr. Seuss’ The Grinch.
The Outlaw King is a period piece about Robert the Bruce, the legendary Scottish king who united his people in their fight for independence from British rule. Chris Pine stars as King Robert.

Fantastic Beasts: The Crimes of Grindelwald is in the Harry Potter sub sequel of a prequel category, introducing fans to a new cast of adorable characters from the Wizarding World. In this film, we meet baby Nifflers, a Kelpie (a Scottish underwater monster) and a Leucrotta-described as a large, moose-like creature.
Ralph Breaks the Internet is another children’s film with some grown up proclivities, including the star John C Reilly who is also breaking the internet with multiple films out this year. This film is the sequel to 2012’s Wreck-It Ralph from Disney, where arcade heroes Ralph (With Reilly’s voice), and Vanellope (Sarah Silverman), go on the internet in search of a replacement game part and adventures ensue accordingly.
Robin Hood returns to the screen with Taron Egerton starring as the overworked man of the forest in this action adventure film that someone must have clamored for…?
That’s all for now, folks, so until next week, stay tuned in and see you at the movies!